Posted by Becky S. Vickery on February 22, 2017 in writingscarz 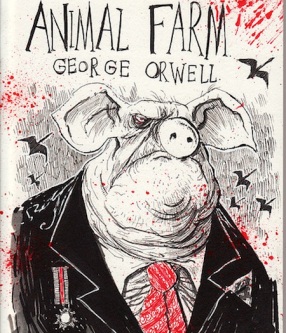 While I was working on the first installment in the Horns & Halos series, I decided that I wanted my teenage characters to be reading a book for their Lit class. I remember being in high school/middle school and having to read the classics: To Kill A Mockingbird. A Separate Peace. The Scarlet Letter. And the list goes on. Even now my children are in middle school and they’ve both been down that same road of reading classic pieces of literature for their English classes.

One of the things I remember most about my own school days, is discussing whatever book we were being forced to read and take tests on, with my friends. It’s this concept that I fused into the Horns & Halos world. Allyster, Jasper, and Harper are reading the classic George Orwell novella Animal Farm. As they’re discussing the plot and characters, they realize that their current situation isn’t too far off from the repressed world of barn animals in Orwell’s work. It was a way to include a story I love into a story I created, and it worked out well. My characters were able to go through the experience of reading Animal Farm, even though they’re fictional. And in the end, that little bit of classic literature opened their eyes and helped them piece together the nature of what they were really up against.

Now it’s time to start on the next book in the series. Horns & Halos 2: All Of Them Criminals will again see my main characters taking on a classic for their high school Lit class. I ran through a handful of ideas about which book it should be, but I ultimately settled on the John Steinbeck gem Of Mice And Men.

I read Of Mice And Men when I was in high school. I loved it then, and I can’t tell you how many times I’ve seen the movie (featuring John Malkovich and Gary Sinise), which does an excellent job portraying Steinbeck’s characters. In Horns & Halos 2, one of the biggest internal obstacles that my main character, Allyster Williams, will face will be that of feeling responsible for his friends and the guilt that sits on his shoulders about what happened in book one (no spoilers here!) when he took a risk and his friends believed in him enough to follow him. Now he’s faced with the choice to take another HUGE risk, and his friends’ well-being and even their lives will be put into danger.

Much like George Milton in Steinbeck’s classic, Allyster is cubbyholed into a situation of being responsible for someone other than himself. Even before danger enters the room, Allyster is in the seat of being in charge of those around him on a slew of levels, and he struggles to handle what exactly that means. While he wants to protect his friends, he feels frustrated, and waivers between taking on that responsibility and shrugging it off in an attempt to not carry it. This is where Of Mice And Men comes in as Allyster relates deeply to George Milton’s struggle throughout Steinbeck’s novella.

Currently I’m working on chapter three of Horns & Halos 2, and already Of Mice And Men has made an appearance. I’m excited to see how much of an impact this classic will have on my characters as they head into yet another adventure against the powers that be, segregation, coming of age, relationships, a trek through the wilderness, facing old rivals, and the Christmas that forgot about them.

Check out book one in the Horns & Halos series now! Available in paperback or on Kindle. Clicky