Posted by Becky S. Vickery on May 9, 2015 in writingscarz

Our house has become increasingly digital over the years. My husband has been the driving force behind this. I was quite happy with CD’s, DVD’s, my old HP computer and the big clunky televisions that dotted our living space. But one by one he started to get rid of them – our Dell and HP computers became Macs. Our three-ton televisions were swapped out for flat screens. And then one day he brought in a little black box called an Apple TV – which was truly the beginning of going digital. The Apple TV felt more like a magic box than a technical device. It allowed us to stream Netflix (something I really loved) and an on demand NHL network where we could watch our hockey games the day after or the week after – depending on our time schedules, along with a host of other things. It was neat. You could even buy or rent movies from the Apple TV, all in digital format.

I admit that going digital with my movies was scary. I love movies. They are one of my favorite things in the world. When my husband told me that I shouldn’t buy dvd’s anymore, that if I want something we’ll just buy it digitally instead, I was panicked. Questions came like, Where are the movies? Are they in the Apple TV? What happens if something happens to the Apple TV, could I still get to my movies?

Admittedly, looking back, it was probably an overreaction on my part, but hey, I was the hesitant one in all this. It didn’t take long, of course, for this fear to subside. I quit buying DVD’s and instead had my husband buy every comedy, drama, Disney film and horror flic digitally.

Then it was the Kindle Fire. “But I like my books,” was my argument to my husband. “I like to hold them and flip the pages.” His simple statement? “You’ll like this much better. I promise.” Out of everything we’ve gone through, technology wise, I think it’s the Kindle Fire that he forced on me the most. He told me he was getting me one, and if I really didn’t like it, I could give it to the kids. That didn’t happen of course. The thing about my husband that you must understand is that he has the annoying quality of always being right. It’s cause for a victory dance in our house when either me or the kids get him to admit that he was wrong about something. But with the Kindle Fire, he was absolutely right. It didn’t take long and I was hooked. Now every member of our household owns one.

Next came the music. By this time we both already had iTunes. We would buy the physical CD and then download it to our computers. Simple. But then my husband found Spotify. Again I was the hesitant one. My husband is no slacker. He did his research. He tried a few different music sharing sites, comparing the technology and capabilities of each, and in the end he decided that Spotify was the best way to go. He had no intentions of taking a free account. He signed himself up for the premium package, making sure to tell me all the pluses of this, including the fact that the artists get paid every time you listen to one of their songs on Spotify, so it’s not like you’re “stealing” or “cheating” the artists out of anything. Instead of buying an album once, your favorite artists get a little something every time you enjoy their creations. Pretty soon I had my own Spotify account and now we’re all on the Spotify family plan, each of us with our own accounts. Spotify is my friend, I listen to it all day long – on my computer, or in the car, it goes where I go. We no longer buy CD’s. We don’t even own a proper CD player anymore.

The Amazon Fire TV came next. This was another magical black box that let us buy movies and stream Netflix, YouTube and a slew of other things right on our televisions. It even has a voice control, so you can simple ask it for The Addams Family, and it will search all its known devices to see if it’s available. Very cool. We’ve also recently added Hulu Plus so now we can stream all the latest (and oldest) TV shows when and where we want so we’re not kept under the thumb of cable’s schedule.

This is the world I live in. Digital. Nothing to hold in your hands or to set out for display and nostalgia. Everything is readily available. There is no more searching through the shelves at FYE for the next album of my favorite band or hunting through that massive $5 bin at Walmart for a good movie. Now I just have to go on Amazon, type in what I want, and it’s mine. Boring. Convenient, but boring.

That’s when I decided we needed a record player. A friend of mine from Twitter had been collecting records for awhile, and she would post the photos of them. It was nice to see the covers of albums I knew from years past or new ones that I had never seen. Living in the world of Spotify, all you see is a track list, no album art or liner notes to inspect and love. I started asking my Twitter friend questions about the records, especially after the big Record Store Day event. It all sounded exciting, going out and hunting down a record. After living in my digital world for years now, her pictures and stories about gaining a record collection was intriguing.

So I bought a record. Admittedly, I bought it from Amazon (old habits die hard!) but it was still exciting. For my very first record, I bought an album from the band We Came As Romans – a group I have recently fallen in love with. I was so excited I Tweeted my friend first thing proclaiming: Look what I bought!

That was when I realized that we didn’t own a record player. Oops. Back to Amazon I went (what can I say, I’m a creature of the digital age) to find a record player. I read reviews and squirmed at price tags. To get something descent, it was going to be a big purchase, somewhere over $100. This wasn’t something I could buy and hide in the closet. I was going to have to tell my husband.

“Why would you buy a record?” was his reaction as he looked at me like I’d lost my mind.

“So I can play it,” I cheekily answered. “The problem is, we don’t own a record player.”

At this point, I knew it was going to take some work to get him to agree to go along with me on my record player adventure. This was the man that had single-handedly taken our household into the technological now, and I was asking him to take 10 steps backward.

“I don’t understand why you want this,” he kept saying. “They replaced record players for a reason. They sounded awful.”

“They’ve improved them,” I argued, though having never heard a record player – ever – I really had no idea how it would sound. “Vinyls are on a comeback. They sound great now!”

He wasn’t buying it, but like all things in our marriage, he gave me what I wanted. In the end, he even helped me pick out the record player we should buy. He made a space for it in our living room, set it up when it arrived, and we listened to our first recored together. He has since allowed me to buy him a record of his own, and for my birthday this year we went out hunting for records. We shopped around, flipping through albums and going from store to store. We debated and discussed which albums were available, album covers we hadn’t seen in years, and compared the range of artists that had records available. That night we ended up buying a classic album we both love from our teenage years – Ten from Pearl Jam. We spin it on our record player, and we both sing along as we make dinner or play Mario Kart 8 on the WiiU. 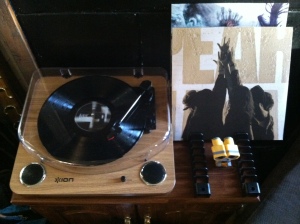 The kids have really gotten into it too. They love to pick out a record (we have about six as of now, and we’re growing our collection) and play it while they read, do their homework or play video games. They argue over who gets to turn the record over. Yesterday while I was taking my kids and their two cousins to school, I had Fall Out Boy playing in the car. My daughter turned to her cousin and said, “We have a recored player, and we actually own this album! You should come over and listen to it.”

The record player has been a great addition to our family. We listen to a lot of music, and I hope that the love of music and the appreciation for art is being passed along to our children.

Before I end this blog, I have to tell you that last week my husband ordered the Amazon Echo – the super smart, voice command blue tooth speaker. It answers questions, tells jokes, plays whatever song you want – all on voice command. It’s a front runner in technology at the moment. We’re thinking of sitting it next to the record player when it comes in, just for the irony.

2 comments on “For The Record”